Navigate back to the homepage
About
Résumé

Smart India Hackathon is a national level event yearly organized by the Government of India. Calling this event ahackathonis misleading as the problem statements are declared well in advance (four months prior). Reputed government and private organizations such as the Indian Space Research Organization (ISRO), Defence Research and Development Organisation (DRDO), Ministry of Railways, Amazon Web Services, and Cisco participate and furnish students with research-based problems pertaining to their domain.

For students to qualify for the grand finale, they have to win an institute level hackathon. The selected teams from each institute (usually 4-5) submit their proposal to the respective organization, which then scrutinizes and nominatesat mostfour teams for each problem statement.

It is a grueling albeit highly rewarding experience. I was leading a team of six and aftera week of hunting, we picked a perfect problem statement that complemented our interests -Air pollution hot spots detection and identifying the source trajectories using ML/AI techniques (submitted by ISRO).Through this blog post, I intend to detail you about my team’s experience pursuing this problem and mine as their leader.

Three months back, I was oblivious to the implications of air pollution. To be candid, like every diligent student in India, I studied environmental science for grades and nothing more. After spending the last two months investigating this problem, my views have radically changed. Air pollution is truly insidious and if not controlled (especially by the developing nations) can irrevocably change mankind’s future.

As a prerequisite, each member of my team had to undergo the following NASA organized seminars -

These seminars introduced us to the concept of remote sensing and briefed us on the two popular satellites used to measure air pollution -MODISandOMI. They further described various satellite attributes such as spatial, spectral, and temporal resolution; optical depth, solar zenith angle and other pollutant parameters (column concentration, scanline, etc). While we eventually usedSentinel 5Pfor our research, these seminars provided a solid foundation for our later work.

The steps we aimed for concretely championing this problem can be molded into three parts - extensive research, clear framing of thoughts, and a rigorous build.

Our research did not end with the seminars, in actuality we spend a whole month perusing papers and journals. At last, some of the research-papers/reports/articles that highly influenced us were -

Early on we realized that converting satellite concentrations to ground-level data can be highly beneficial. Concretely, such a conversion can enable us to find theAir Quality Indexof the pollutants (for each location) and can help to validate our findings. To make this a possibility, we decided to design aGeographically Weighted Regression Model. Finally, to detect locations with high air-pollution concentration, we used the clustering technique -DBSCAN. FromScikit-Learn’s documentation, DBSCAN is particularly useful fornon-flat geometry and uneven cluster sizes.

Our final proposal was (as submitted to ISRO):

We are going to aggregate data from satellites - Sentinel 5P and ERA5. The aggregated data is then used for identifying hotspots, predicting forward/backward air pollution source trajectories, and identifying locations where long term occurrences of such hotspots are seen.

To measure the level of pollution of a hotspot, an AQI (Air Quality Index) value is calculated based on the guidelines provided by the C.P.C.B, India. Various satellite-obtained pollutant concentrations(SO2, NO2, CO, PM2.5) and geographic parameters (such as Boundary Layer Height, Wind speed, etc.) will be an input to our geographically weighted regression model which will help estimate ground-level AQI concentrations.

A clustering algorithm (DBSCAN) will be applied to the AQI concentrations to detect hotspots. HYSPLIT model will be used for predicting source trajectories. For validation, predicted ground-level concentrations are compared against ground station data. Hotspots and source trajectories are being visualized over a given timeline. Exact locations of hotspots are detected using geo-decoding techniques.

The charts we designed for our proposal were -\ \ 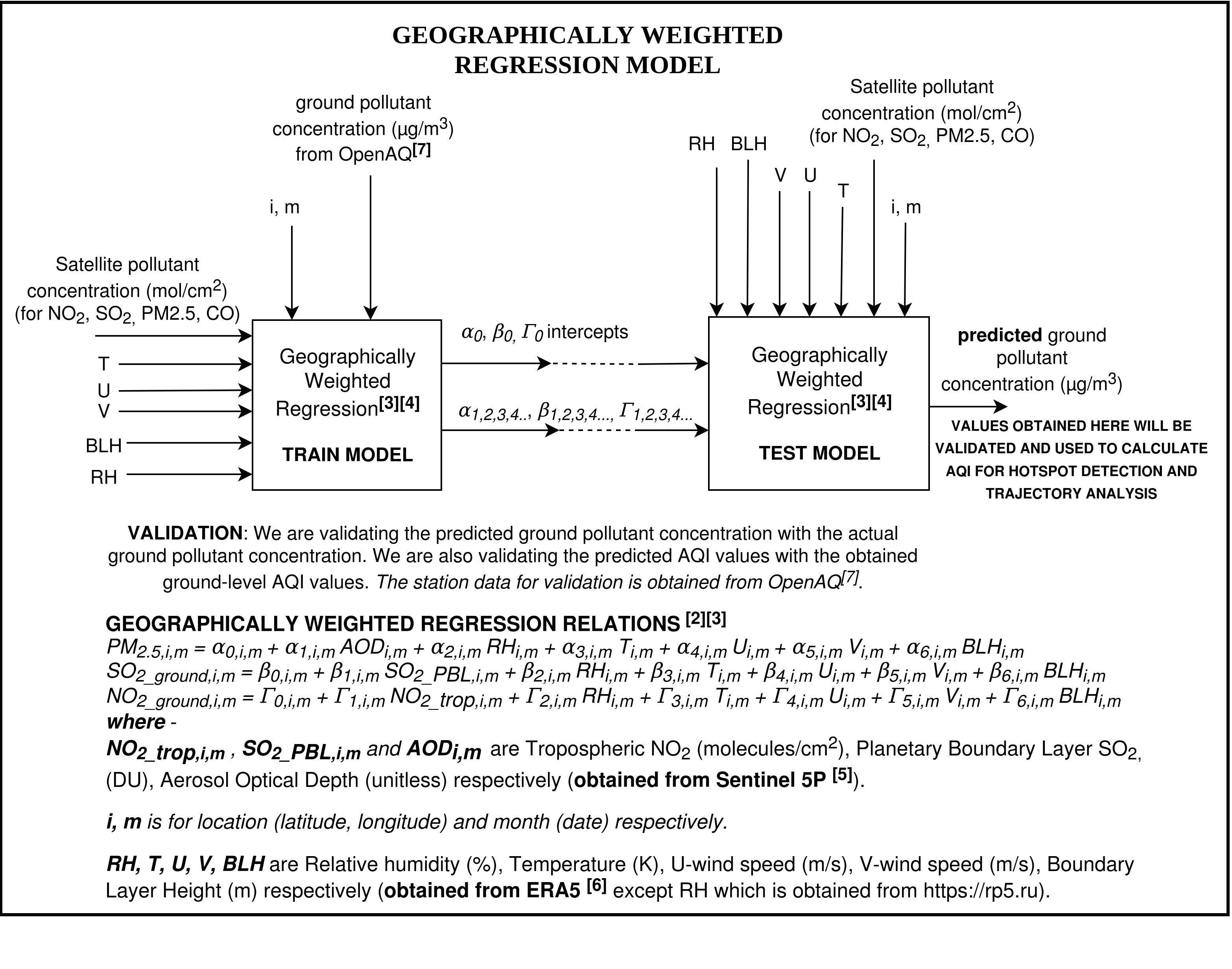 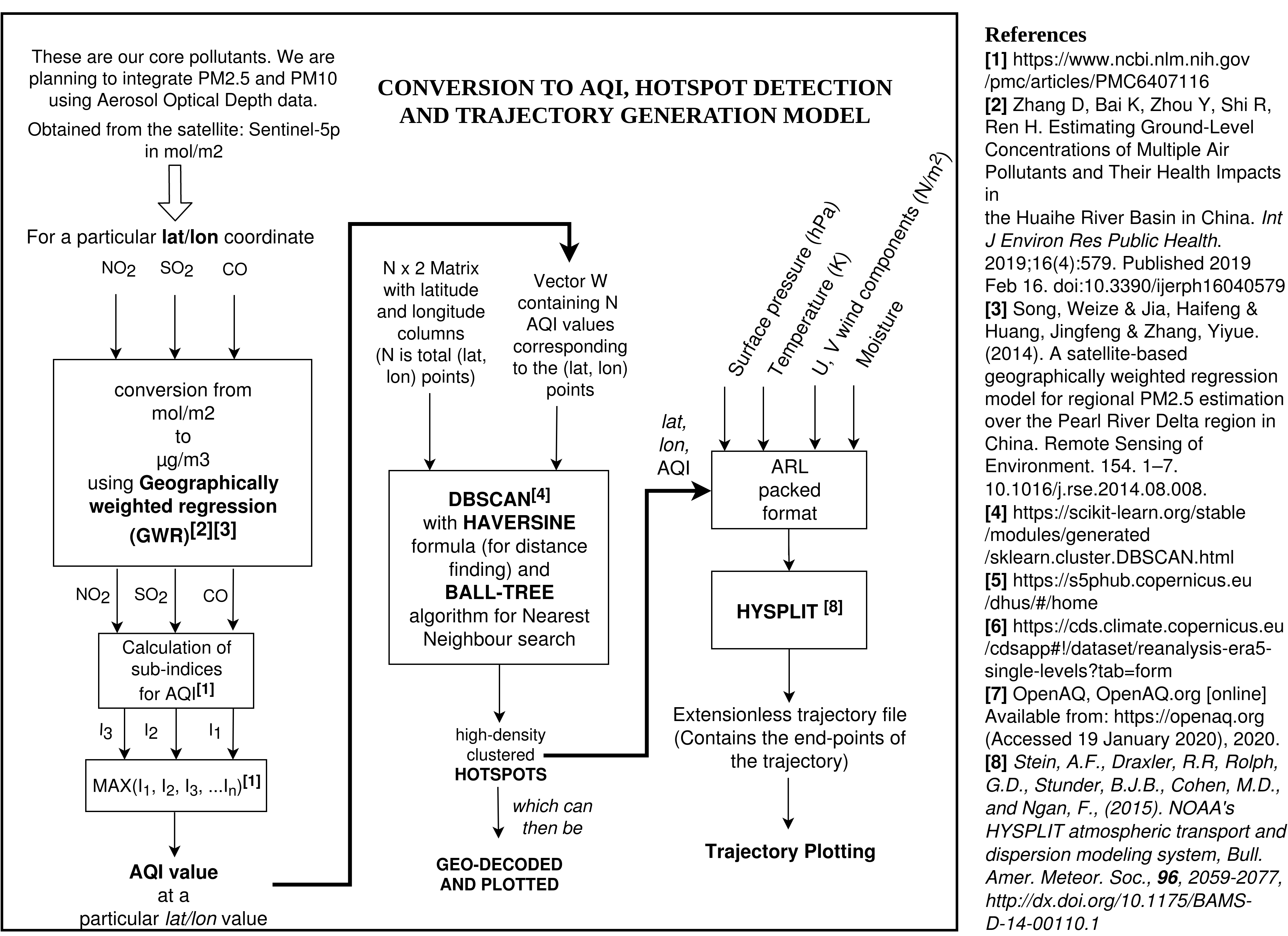 We created a prototype based on the above architecture and were selected by our institute for the next round.The code for our prototype is available on Github. One of the prototypes we designed (for hotspot detection) was -

The above GIF shows the pathetic state of the Delhi-NCR region during December 2019. The map is formed after selecting the most polluted regions in India (top 1 percentile). Geodecoding is used to find the exact locations where satellite had made such observations. Sentinel 5P was used as our primary data source. The numbers in the boxes indicatethe number of observations made by the satellite in that region.The blue hover helps visualize the clusters.Here is the uncompressed GIF[4 MB**]

Although we were confident in securing a bench in the grand finale, by mid-Feb, we decided to halt our build till the results were announced. Alas, life had different plans for us.Our proposal was rejected by ISRO on February 29, 2020.Dejected, all I could think of at that moment was -

Were we underprepared, was there anerror of judgmenton ISRO’s part, thoughts… blames… excuses…

I am optimistic that the experience I have gained in the past 3 months, will prove to be beneficial. Presently, we are planning to write a research paper delineating our findings.

Skills Snapshot Survey is a project done for 10kDesigners. It aims to provide effective solutions to students who want a personalised snapshot of their progress throughout the course

Valuable Lessons From My UX Design Journey at MakeMyTrip.

This is just an attempt to share my learnings from my experiences working as a UX designer at MakeMyTrip.